Simon Cranstoun Announces His Departure From The Dualers 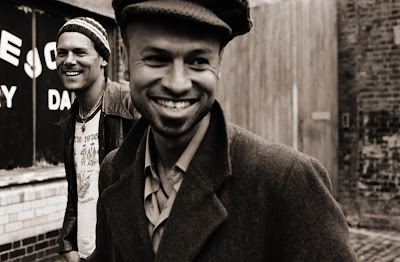 There is some sad ska related news out of the U.K. this week. Simon Cranstoun, one of the two brothers who have fronted The Dualers, a fantastic 60's styled ska band with soul and pop influences, has announced that he is leaving the band to pursue an R&B career following the unexpected success of his solo song 'Dynamo.' His brother Tyber will continue to front the band without him. For the uninitiated, Tyber has always been the brother more inclined towards ska and reggae roots, while Simon has never hidden the influence that Sam Cooke, Ben E. King and Jackie Wilson have had on his vocal style. The amicable split allows each brother to take their preferred musical style to further success.
In an open letter to the band's fans on The Dualers Web site Simon wrote: My brother and I have sung side by side for the last 15 years and have received so much love and support from you all, so it brings me much sadness to inform you that after a lot of thought and careful consideration I have decided to leave The Dualers. I have reached this decision for several reasons. One of these is my desire to explore the influences, particularly those of musical greats like Jackie Wilson, which are shaping my current creative direction. Some of you may already know that I have released a new song called Dynamo which has become a huge hit on the underground R&B scene and is available on iTunes. Read the whole letter here.
Here is the video for the song 'Dynamo' which has received significant radio airplay around the U.K. and E.U.:

Starting their career as street performers, the Cranstoun brothers built a repertoire of classic ska, reggae and soul songs, receiving a phenomenal audience response wherever they performed around the U.K (watch video of their street performances here, here and here). As their street performances became more popular, they drafted a band and landed their self-penned song 'Kiss On The Lips' at an impressive #21 on the UK Singles Chart in October 2004. As an unknown act, they became the first street performers ever to achieve a chart position, selling more records that week than some internationally well-known artists. With no backing or publicity, the band attributed their success to their street shows and a very dedicated fan-base. The band has played support for a variety of bands including Madness and UB40.

Their second single, 'Truly Madly Deeply', was released in November 2005, reaching number 23 in the UK Singles Chart. The song was picked as a featured song in the 2008 major motion picture Fool’s Gold, starring Matthew McConaughey and Kate Hudson, bringing them to the attention of a wider audience. The brothers later launched and hosted Skavoovie: a monthly ska club night in London’s West End which quickly gained a regular following and became very popular with ska fans.
Simon will perform one last show with the band in December before he and his new band beging a tour and release a new album titled 'Throwback' in 2011. More information is available at his Web site. The Dualers will perform all advertised live shows as planned. More information is available at their Web site.

You can buy The Dualers album 'Melting Pot' on Amazon.com:

That's a real shame, their debut album 'Melting Pot' is probably my favourite ska album from the past 10 years. It was interesting (around that time) to see a ska band really trying to achieve some chart success and they did that to a large extent however from what I remember, those 2 singles you mentioned went straight in and out of the charts which tends to happen when there are alot of pre-sales (through fans?) but not followed by much mainstream radio airplay which is needed to push things to the next level. From what I've heard of some of their more recent material, their music seems to have taken a bit of a change in direction.

Thanks for turning me onto these guys, shame it's only after they split, but I'd never heard of them before. I love their 60s influence, right up my street.

I LOVE THE DUALERS ALWAYS SEE THEM IN ROMFORD ;)

just so the information is cortect the ska club Skavoovie was started by Steve Edwards in partnership with tybe...Steve was also the person who helped form the band and promoted all their gigs for the first 3 years... just so you know!

Pray for a reunion.
No dis Tyber.(Love the Prince Buster Shakedown album!)
The whole is greater than the sum of the parts.
C'mon Si you can have both solo & Dualers careers?

I have only recently discovered The Dualers on You Tube and loved the two brothers busking at Romford with the dancing girls etc. I am 76 years of age and had the privilege of hearing Otis Reading and all the greats of that era, but when I heard the Dualers I was pleasantly surprised and decided I had to see them live. The Dualers were to perform in Dover earlier this year but there was a problem at the port of Dover with huge traffic hold ups, so I was unable to go. I then saw they were appearing at Folkestone so I booked up and saw the show. I was disappointed that Tyber did not sing much Reggae more Punk. I would love to see Tyber and Si back together again as the compliment each other.Dave Mackey in Deal Kent.

Too much Jackie not enough self.....pity real talent.