This Is England '86' TV Series Finally Released On DVD 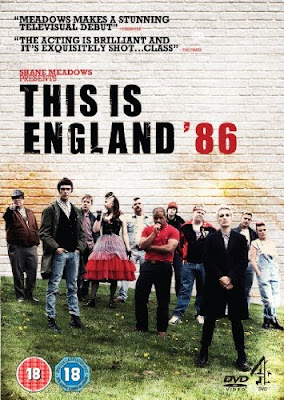 For anyone who has seen the film 'This Is England' and was caught up in the story of a band of young skinheads in the north of England, the news that Channel 4 in the U.K. commissioned the film's director Shane Meadows to create a 4-part TV series titled 'This Is England 86' was greeted with deafening cheers! Picking up 3 years after the end of the film, the TV series was an immediate hit when it aired in the U.K. in September. It also created demand for access to the series outside the U.K. which may finally be satisfied with the release of the series on DVD which is available from Amazon.com UK (unfortunately the U.K. DVD format is not compatible with DVD players made in the U.S. so fans of the series like me are out of luck until a compatible version is released in the States).

As a quick overview, the film centred on 12-year-old Shaun (played by Thomas Turgoose), and his acceptance into a group of skinheads, which is eventually split by a growing racist influence. 'This Is England '86' revisits the main characters – Shaun, Woody and Lol – in 1986 – the year Maradona ends England’s World Cup dreams in Mexico; the year Top Gun is the highest grossing film and the year over 3.4 million Brits are unemployed. Shaun and his skinhead friends are older, but not much wiser. As they make their way through Thatcher’s England, life gets ever harder and darker. Despite this, Meadows’s rampant humor holds fast throughout and Turgoose superbly portrays Shaun’s rise to adulthood. Reviews of the show when it aired in September were uniformly positive including one's from The Telegraph and The Guardian. The DVD release has garnered an additional slew of rave reviews from The Independent and the great film review site DVD Outsider.
When the program aired on Channel 4 in the U.K. in September it was made available for free viewing on the network's Web site for anyone living inside the U.K. (but blocked viewers living outside the U.K.) That said, the movie made fans around the world and their has been significant demand for the T.V. series outside the U.K. For fans living outside the U.K. (including the U.S.), the entire series has been posted for streaming on several Web sites like this one.
In the meantime have a look at a great video interview about the series with Thomas Turgoose (Shaun) and Joe Gilgun (Woody).

The DVD is available for sale on Amazon.com (NOTE: It is for Region 2 DVD players only)

I just want to say, after watching the whole series, I was completely blown away by the story, acting, and directing. What an incredible achievement for a TV mini series. I believe it was as good, if not a little better than the movie. Why can't we have TV shows here in the U.S. that are this great?? I hope Stephen Graham recieves some sort of British "Emmy" for his performance! Great soundtrack too!

Thanks Concert Eye for posting links to stream all 4 episodes. And yes Anonymous, the series is one of the best I've ever seen in terms of story and acting. I've heard that Shane Meadows is considering a 'This Is England '90' which would follow the characters on into the next decade, I for one hope he decides to do that.

Can't wait to see it!