Ska music has a long running love affair with beer.  In fact there are a number of iconic 2-Tone and Third Wave ska songs written as tributes and warnings about the gold elixir. Special Brew by Bad Manners , Beer by Reel Big Fish and 40 Oz. To Freedom by Sublime come to mind as do Stereotype by The Specials and Alcohol by The Special AKA.

Enter Dave Thibodeau and his partners at Ska Brewing Co., a craft brewery based in Durango, Colorado, who have combined their passion for ska music and brewing.  Founded in 1995, the brewery now produces over a dozen award-winning beers including the Pinstripe Red Ale, True Blonde Ale and Steel Toe Stout. Three Ska beers are now widely available in cans: ESB Special Ale, True Blonde, and Modus Hoperandi IPA. The beers all have ska-styled imagery and designs and are available for sale in Arizona, Colorado, Illinois, North Carolina and New Mexico. 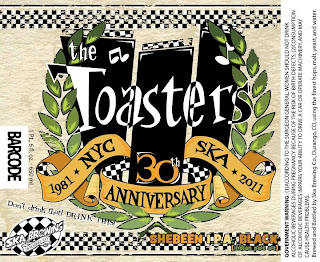 To mark the occasion of The Toasters 30th anniversary this year, the brewery has whipped up a batch of Toasters 30th Shebeen Black IPA (see the bottle label above).  Ska Brewing has also produced a very funny short film titled 'Brew Minions' about creating the Toasters brew which is a parody of the Discovery Channel’s recent series 'Brew Masters.' Bucket from The Toasters makes a very humorous cameo in the film.

Watch the film below while you enjoy a delicious beverage!

Wish we could buy some here in NYC!