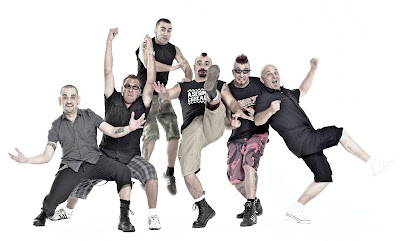 The Spanish ska band Ska-P will make a very rare appearance in the U.S. during the month of November to play one show in New York City and two in Southern California. Never heard of them? I'm not surprised. Ska-P were formed by a group of friends in Madrid in 1994 and their name, when pronounced in Spanish is phonetically identical to the Spanish word for ‘escape’. Somewhere between a left-wing revolutionary political movement and a ska band, they have become a household name in most Spanish speaking countries around the World and easily sell-out tours across Europe.
Because of their uncompromising political stance and their insistence on only singing in Spanish, Ska-P have made few in-roads here in the U.S. or in the U.K. They have been compared to a mix of The Specials and Rage Against The Machine and sing about topics ranging from abolishing the death penalty, social injustice, women's rights, anti-fascism, anti-capitalism, the legalization of marijuana, and the abolishment of bullfighting. The band has notably released a song in support of the Palestinian intifada and another critical of the Catholic Church for its handling of the sex abuse scandal which highlight their political worldview but may also limit their marketability in many places. Politics aside, the band put on an explosive live show and they may be one of most underrated live ska bands in the world.
What is an Ska-P show like? Complete and utter chaos apparently. Here is a English language review of the band's show in London in Mid-October. Below are some videos that provide a sense of the band's sound and their live show including 'Cannabis', 'Welcome To Hell' and 'Paramilitar'.

You can listen to and purchase the album 'Incontrolable' from Amazon.com:

HI. I'm from Bacelona, Spain and as an ska-fan I Hate them since the first time i heard them. Tha give ska a bad name. Andreu

Thanks for the comment. I can understand how some ska fans might not like Ska-P. They certainly are not a traditional ska band in look or sound. I think people either love or hate them.

I'm from Caracas, Venezuela, and I am of those who do not like at all the Ska P, and not by Ska-Punk sound, but because we actually know are musicians really hypocritical in its stance pamphlet ... I mean NO FEEL REALLY SAYING in his lyrics, and I say this because they were here in Venezuela and was so sadly demonstrated, among other things

Gracias por su mensaje en ingles y Espanol! I have read that many people feel that Ska-P portray themselves as anarchist but are are signed to RCA who are a major label and that this is a contradiction.

Mmm, well... As far as I know, there is no "love or hate" with this guys... At least, not for anyone into any form of Jamaican roots or even Jam-influenced music... Ask anyone in their own country: they'll tell you they are a joke.
Ska-P really are far from the urban guerrillas they seem to try to portray themselves as. Not the case. Silly lyrics, silly music.
But this is obviously not the first time that a band seems o be taken differently in different places. Maybe the language gap helps them after all.

By the way, not only Ska-P play a hopelessly poor version of ska, but also they happen to be a highly commercial project, not controversial at all in Latin America or Spain... Dont take their press kit so seriously!! (Im just kiddin here; I think this blog is actually an example of truly rich jounalism).

Well the comment tide seems overwhelmingly against Ska-P! I think I originally saw them as an extreme left wing version of The Mighty Mighty Bosstones in terms of sound (but not lyrical content). They are not generally my cup of team but since they rarely appear here in the US and are virtually unknown here (outside of the many Spanish speakers here in the US) felt they deserved a post. I may go see them out of curiosity and will post if I do.

In the meantime keep the comments coming.

Ive always liked their sound even though alot of their music seems to be anti US or Western.

If you do like their style of music, another band to check out is Skalariak, its similar but toned down just a notch.

Hello, I am from Los Angeles and since discovering Ska-P they have been one of my favorite bands. It was refreshing to hear a band take a stand. Not many bands have the guts to say no or to directly tell the government, any government, to stop. I love their message and I wish more people would listen to them and understand the message they are trying to send. AND they were GREAT in Pico, I cant wait to see them again :)

I am a big fan from this group. Do you know if we will perform in Madrid this year?