Unsung Bands Of The 2-Tone Era - Guns For Hire: From Imaginary Band To The Real Thing 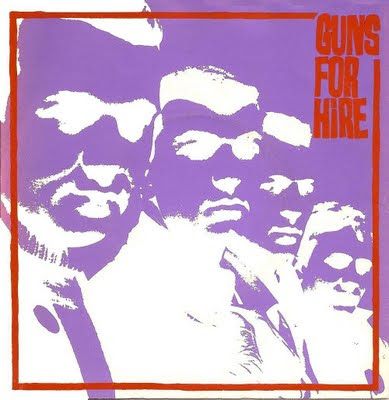 The story of the band Guns For Hire is probably one of the best (and least well known) of the entire 2-Tone ska era. Its a story that has all the ingredients of a Hollywood movie script and one where fact is most definitely stranger than fiction. As 2-Tone took-off, London became a hot bed of A&R men knocking each other over to jump on the ska bandwagon. As The Specials, Madness, The Beat, The Selecter and Bad Manners started placing songs high into the pop charts, the competition among record companies to sign their own ska band became intense. So intense in fact, that a band like Guns For Hire who started out as a prank hatched in a London pub could go from joke concept to real band in just a few short months.

Guns For Hire were a group of friends (Vaughn Tolouse, Tony Lordan and Gary Crowley) who were fans of the music scene exploding all over London in 1979. In the anything goes/DIY energy of the time, they decided to form a band of their own. They agreed on the name Guns For Hire (taken from the Prince Buster song). With the name settled they should have been finding musical instruments and learning how to play them! Instead, the friends decided to put that step on hold and put their time and resources into making up a large batch of Guns For Hire buttons and stickers. In the matter of a few weeks the stickers and buttons started turning up all over London. And then, something strange started to happen.

According to the band's history posted on their MySpace page, "One night at a gig in Aylesbury, a punter came up to one of the (nonexistent) Guns and gestured admiringly at his GFH badge. The punter then continued to extol the virtues of Guns For Hire, who, he claimed, he had seen play live only the night before! This called for some positive action. Gary Crowley relayed the story to his boss, Clive Banks, promoter for Nick Lowe and Elvis Costello. After much badgering by Gary, Banks agreed to stump up the cash for the Guns to record a demo. Only one problem with this rock 'n' roll swindle: unlike the Sex Pistols, Guns For Hire couldn't play a note between them, even if they had existed! At the news of this upcoming recording session, Vaughn and Tony decided to take on the Guns mantle, while Gary was to be the band's manager. Deciding that having a couple of people involved who could 'play' would be a good idea, Vaughn and Tony enlisted the services of Mike Herbage, a friend of Tony's (who had met, each under the misapprehension that the other wanted to start a fight!) and one John Hasler, original drummer with Madness. Suddenly things were moving." 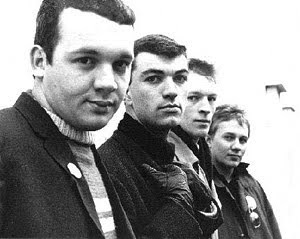 After a few quick rehearsals, the band entered the studio for the first time to record a demo, which wasn't great sounding but did generate enough interest from Terry Hall, lead singer of The Specials, to fund a further demo. With 2-Tone in full effect and the whole endeavor a bit of 'piss-take', the Guns decided to jump on the 2-Tone sound. As such, Herbage and Toulouse came up with a punk infused ska song called 'I'm Gonna Rough My Girlfriends Boyfriend Up Tonight'. And that's where things start to get really interesting. According to the band's history on their MySpace page: 'The stickers were still getting stuck and 2,000 badges had now been sold. Guns For Hire hadn't even played in public. Polydor Records offered to put the group into the studio to record. Swindle? You better believe it. The demo of 'Boyfriend' and a punkabilly version of the Banshees' 'Staircase Mystery' were enough for Korova Records to offer a one-off single deal. The Guns now had two songs to their name. Zig Zag Magazine printed a full-page article about the group in their 100th edition in late 1979. Malcolm McLaren would have been proud of this one!"

'My Girlfriends Boyfriend' was recorded at a dingy recording studio in Camden Town and released in early 1980. Elvis Costello sang its praises and the U.K. music press gave the track decent reviews. Now, however, people began clamoring for the band to play live. What to do? Considering the band only had two songs to their name they had no wish to play live. It was all one big joke and that's how they wanted it to stay. They had made a single and that's as far as it was going to go. After much back and forth, they were talked into playing a show and made their live debut in August 1980 at The Rock Garden in London's Covent Garden. The NME reviewed the gig and actually liked the show. According to the band's history, 'This was now getting ridiculous. A matter of months before, the group was a nonexistent joke and now they had released a record, had been made offers by major record labels, and a gig that the group themselves described as 'a drunken bloody mess' had gotten a decent review in the most prestigious music weekly in the country! After several more live shows around London, Guns For Hire sat themselves down and decided what to do next. The joke had been played out and a laugh had by all concerned. It was a case of enough is enough or to take it all a stage further. John Hasler decided to call it a day. The rest decided to continue but felt that the joke had gone on long enough.'
A name change was called for. After suggestions varying from The Discords to The Signet Committee, the name Department S was decided upon (taken from the TV detective spoof of the same name).
Below is a download link to the long out-of-print version of the 7" single released in 1980 on Korova Records. The former band members have given their permission to share the songs. Thanks to Tone and Wave blog for the link.
Guns For Hire 7" - I'm Gonna Rough My Girlfriend's Boyfriend Up Tonight/I'm Famous Now
Posted by Marco On The Bass at 6:55 PM

What a fantastic tale! Thanks for sharing it.

(dear sir MARCOontheBASS : Your page opened some new doors to SKA for me today ,thank you. )

Great story! Sometimes I feel like a "Gun For Hire" myself, with my band, not sure about being any good at all...It does happen I guess