Our Lips Are Sealed: The Story Behind One Of The Greatest Pop Songs Of All Time 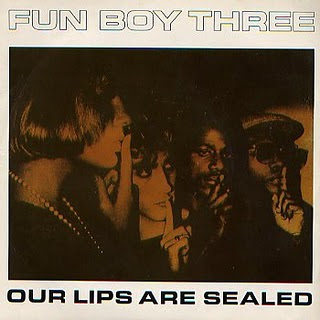 It was 29 years ago tomorrow (March 5, 1982) that the Fun Boy Three comprised of three ex-members of The Specials (Terry Hall, Lynval Golding and Neville Staple) released their first self-titled album.  The 11-track album had a distinct African influence that was heavy on drums, percussion and Jamaican-styled vocal harmonies.  The album was a complete departure from The Specials 2-Tone sound and quickly established Fun Boy Three as pop stars and household names across the U.K.  They quickly followed-up with 'Waiting' released in January 1983, which in my humble opinion may be one of the best albums released in the 80's.  Produced by David Byrne of the Talking Heads, the album was a beautifully produced and sleek-sounding collection, filled with tales of life's trials and tribulations covering subjects from child-abuse and drug smuggling to racism, divorce and infidelity.  In honor of that record, I'm taking a closer look at the story behind of the most popular songs from the album, 'Our Lips Are Sealed', which was named one of the 100 Greatest Pop Songs of all time by Rolling Stone in 2000.

While many casual fans of the song are probably familiar with the 1981 version recorded by The Go-Go's for their 'Beauty and The Beat' LP, the song was co-written by the band's guitarist Jane Wiedlin with Terry Hall (which helps explain why two separate versions of the song were released within 2 years).  The Go-Go's version made the Top 20 in the U.S. while the Fun Boy Three version hit #7 in the U.K. According to an interview that Wiedlin did with the Songfacts website, "Our Lips Are Sealed' is actually the story of a secret romance based on a short 'tour affair' that Hall and Wiedlin had when their respective band's toured together:


'In 1980 we were playing at The Whiskey on Sunset Strip, and The Specials were in town from England, and they came to see us, and they really liked us and asked us if we would be their opening act on their tour. I met Terry Hall, the singer of The Specials, and ended up having kind of a romance. He sent me the lyrics to 'Our Lips Are Sealed' later in the mail, and it was kind of about our relationship, because he had a girlfriend at home and all this other stuff. So it was all very dramatic. I really liked the lyrics, so I finished the lyrics and wrote the music to it, and the rest is history. And then his band, The Fun Boy Three, ended up recording it, too - they did a really great version of it, also. It was like a lot gloomier than the Go-Go's' version.'

Wiedlin and Hall's versions offer insight into their personal take on the  affair (one upbeat, poppy and sunny and the other very dark and claustrophobic). Speaking about her relationship with Terry Hall, Wiedlin added:


"Like I said, he had a girlfriend in England, and they were talking about getting married and all this stuff. So I don't know how I got in the picture. And, you know, that's something that I did as a teenager, maybe I was 20. That's something I would never do now, knowingly enter into a relationship with someone who was with someone else. I mean, it was completely screwed on my part. Although I think when people do that, you really have to look at the person who's in the relationship, and they have to take the burden of the responsibility as well. Anyways, it was one of those things with the tragic letters, "I just can't do this." You know, "I'm betrothed to another." All that kind of stuff. And I think he ended up marrying that woman, and having kids, and of course now they're divorced, so… ."


The Fun Boy Three also recorded an Urdu version of the song (yes Urdu, one of the main languages of Pakistan). There are two possible stories behind the recording of this rare b-side version. The first is that Ingrid Schroeder, a member of the Fun Boy Three backing band, read and recorded phonetic Urdu lyrics (which seems plausible given the rather flat sound of the vocal delivery). The other story (which I prefer!) is that the band brought an older Pakistani woman into the studio and had her translate and then record the lyrics. The band may have been prompted to record the Urdu version by the album's producer David Byrne, who  had recently recorded  'My Life In The Bush Of Ghosts' with Brian Eno which featured a lot of 'found' voices mixed with danceable beats. Have a listen below.

'Our Lips Are Sealed' continues to have legs nearly 30 years later. The song was re-worked by Nouvelle Vague and Terry Hall a year or so back. The video features an old Louise Brooks movie. Nouvelle Vague's singer Marina Celeste has also just recorded a new album called 'The Angel Pop', which is a collaborative project with Hall out on April 18th.

Back in the day when I was in high school (and even now), I loved both versions of this song. The Go-Go's version was all sexy, Let the Good Times Roll, New Wave made by attractive California girls (I wondered where could I meet young ladies like this in Yonkers?!?!), whereas the FB3 take on it was gray, depressed (both in terms of the economy and what was going on in Terry's head, as it turns out), paranoid No Future Thatcherite England.

Didn't know that Hall and Wiedlin had an affair, but it makes complete sense. I knew the Go-Go's had performed backup vocals on The Specials' "More Specials," so I assumed that they had struck up a collaborative friendship or something that led to this tune...

Also, Terry, what the hell is up with your hair?!?!

And the clips from the Louise Brooks movie are stunning--they go really well with the song (and I want to track down the original film).

Great story of "Behind the Music". Terry looks like Robert Smith and I like that Lynval is rockin the 2-tone shirt.

the movie is called "the diary of a lost girl"(1929)..based on a book by maragarete böhmer

Hi all, can anyone tell me who the all girl backing band were on there Fun Boy three version of Our lips are sealed?

Great collection of info here. I was a big fan of Hall and the Specials and Fun Boy 3. I think Waiting is a hugely under-rated album and I was listening to it yesterday (it still has the impact on me it had 30 years ago!)

Our lips are sealed is one of my favourite tunes ever, it resonated with me during a split with my girlfriend and still leaves shivers down my spine whenever I hear it. Terry Hall is a legend - downbeat but so spot on! I only heard the go go's version for the first time a few years back but it's a really good version too.