Please Support The 'Legends Of Ska: House Of Joy' Documentary 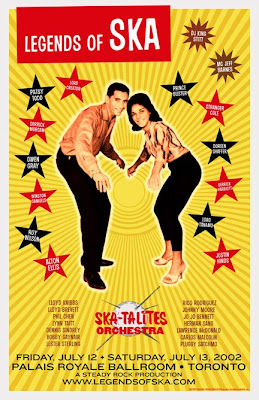 I don't often use this blog as a soapbox but I do want to draw your attention to a creative endeavor that I believe is worth a few minutes of your time and perhaps a few of your hard earned dollars/pounds/euros. But first, please take a minute or two and watch this video.


'Legends Of Ska: House Of Joy' is a documentary film directed and produced by long-time ska and reggae DJ, promoter, lecturer and fan Brad Klein. Inspired by the Buena Vista Social Club and Ken Burn's Jazz series on American Public Television, Klein decided in 2002 to produce and film the largest vintage ska show ever, bringing together an unprecedented number of the original veterans of ska including Monty Alexander, Derrick Morgan, Stranger Cole, Prince Buster, Alton Ellis, Justin Hinds, Patsy Dodd, Owen Gray and more. Klein was fortunate to raise enough money to present the 'Legends of Ska' concerts in Toronto, Canada over a long weekend during the summer of 2002. The review in the Jamaica Gleaner was outstanding and the event was named '2002 Concert of the Year' by Now Toronto.

Klein initially thought reuniting the greatest collection of original Jamaican ska singers and musicians in one place was going to be the hardest part of the documentary process, but it turned out to be the easiest. Raising the money to complete this project through traditional means has not worked out which is why he has turned to Kickstarter for additional crowd-sourced funding.

Currently, all principal photography has been completed and the film is in post-production. Klein estimates he needs $50,000 to complete the project and so far he has raised close to $10,000 through Kickstarter. Note that ALL the money raised from Kickstarter will go directly towards completing the film. Klein's priority is to finish editing the film by late summer 2011, then hit the film festival circuit. The funding will also cover the sound mix, high definition transfers and marketing. Watch a trailer for the documentary:

I recently connected with Klein to find out more about his love of ska and the genesis of the 'Legends Of Ska' documentary project and how ska fans can finally help him finish the documentary. Read on...

What is your personal connection to ska?
I listened to 2-Tone 30 years ago, then REALLY got into original Jamaican ska 20 years ago, before hosting my own Ska radio program during the Third Wave.

Do you remember the very first time you heard ska? Do you remember the first record or live show you ever saw?
Urban Blight from NYC did a lot of ska tunes and I saw them many times at The Haunt in Ithaca. Bim Skala Bim, The Toasters and The Crazy 8s also came through town. Never forgot my first Fishbone show at First Avenue in Minneapolis. Total ENERGY!

What was the inspiration for the documentary?
Right after interviewing Derrick Morgan live on the radio (KUOM-AM) in late 2000, I wondered out loud when someone was going to make a film on the music we love. That was my "light bulb" moment and I have worked on the project ever since. That interview is available on the film web site www.legendsofska.com

What was the response from many of the musicians who are featured in the documentary when you first approached them with the idea for the film?
"Ya mon. Set it up!"

What kind of input/feedback have you gotten from the ska community about the project?
They all say they like it and can't wait to see the finished film. Problem is, it has been extremely difficult to raise the funds needed to finish the film. That is why I am now turning to Kickstarter for crowd funding. I thought the film was going to be completed years ago. It has been a long time since the Legends of Ska concerts were held in Toronto during the summer of 2002, but I still get emails from people who were at the shows and that keeps me going forward.

There's a who's who of ska artists and musicians in the documentary. How hard or easy was it to get them all on board with the project?
That was really fun. Digging around, calling people who might know this singer or a specific musician. This all happened before Facebook, so there were many dead ends. But it was a great feeling to get the right phone numbers for guys like Derrick Harriott or Lord Creator. The phone would be ringing and all of a sudden I would hear a distinct voice say "Hello," and I thought BINGO!

Its taken ten years to complete the film ahead of pre-production. For the uninitiated, can you explain a little bit about the process behind how a documentary film is produced and what keeps you busy during that time?
Most of the actual filming was completed years ago. Editing takes a long time and can drive you nuts, but that is where it all comes together. The constant hustling for financing is also a major hassle. A producer does 90 percent of everything for a film and 90 percent of that is raising the cash. It is exhausting.

Can you share any unusual or particularly memorable experiences from filming the documentary?
The Legends of Ska concerts took place over four magical days. Everybody made it to Canada happy and healthy, with everyone knowing that this was their official reunion party.


In your opinion, what is ska's enduring musical legacy?
Reggae would not have happened without Ska, and though it was originally a heavy mix of jazz and American R&B, the singers and musicians made it into their own distinct sound.

Tell me a bit about the Kickstarter project? What will the funding you still need go towards?
It costs real money to make a film and I have always used professionals every step of the way to ensure that the quality of the production is top notch. The money raised from the Kickstarter campaign will go towards final editing, the sound mix, HD blow ups, marketing & all sorts of other expenses which must be dealt with before the film can be released.

Klein has set a goal of having the film finished by August of 2012, which will also mark Jamaica's 50th anniversary as an independent nation. Please consider helping him get the film finished!
Posted by Marco On The Bass at 7:22 AM

Marco,
Thanks for posting this.
A very worthy cause, indeed.
I just made my donation.
Sean Moore