The Tide Is High: Blondie Cover The Paragons Rocksteady Classic And Hit #1 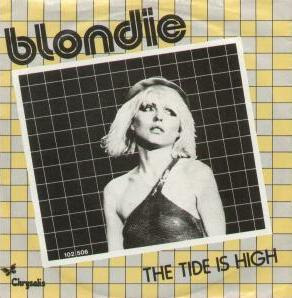 If memory serves, I first heard Blondie's reggae pop cover version of The Paragons rocksteady classic 'The Tide Is High' at a roller rink when it was released 30 years ago.  My friends and I went through a rollerskating phase. It was a way to try and meet girls, but it was also as close as we could get to a music club atmosphere. Though the rink DJ played a lot of late 70's rock, the play list was also chock full of early 80's new wave. I seem to remember 'The Tide Is High' getting an awful lot of airplay, particularly during the 'Ladies Skate' section of the night.  I've always been a fan of the Blondie version of the song and I've always particularly liked the slightly warped sound of the horns (to my ears anyway) which gives it the dusty feel of a wobbly old 45 without actually sounding consciously 'retro'.

While Blondie has never been accused of being a bastion of artistic integrity, the band more or less managed to maintain their ideals, and like The Clash incorporated reggae and early hip-hop into their sound. Their song 'Rapture' made them one of the first bands to acknowledge New York's up-and-coming rap scene, which is an amazing feat when you consider it was released in 1981.  However before 'Rapture' there was 'The Tide Is High' which brought the sound of reggae to American radio airwaves again.  And like Paul Simon nearly ten years earlier with 'Mother And Child Reunion', Blondie's embrace of late 60's Jamaican rock steady took them to the top of the charts.

First a bit of history. The Paragons were one of Jamaica's first vocal groups and were heavily influenced by American soul music and the tight vocal harmonies of other Jamaican groups of the early 1960s. After shifting from their soulful sound and working with producer Duke Reid, they became one of the most popular rocksteady group in Jamaica. Originally composed of Garth Evans. Bob Andy, Junior Menz, and Leroy Stamp, the group really took off when they added John Holt. Holt has voiced and penned so many of Jamaica's rocksteady and reggae classics that in a way, he helped define the island's sound. In addition to penning 'The Tide Is High', Holt also wrote 'Wear You To The Ball' and may be best known for his cover of 'Stick By Me'. He later recorded a selection of cover songs titled '1,000 Volts Of Holt' like 'Help Me Make It Through The Night' which was a hit in the U.K. Below are videos of The Paragons original version of 'The Tide Is High' from 1967 and the version that U-Roy toasted over in the early 70's.

Deborah Harry and Chris Stein of Blondie expressed an early interest in reggae.  Their 'Eat To The Beat' album from 1978 marked the bands first foray into reggae, with ’Die Young, Stay Pretty’. The song almost sounds out of place on the rest of the album. In fact, according to the VH-1 'Behind The Music' program on the band, Blondie toyed with recording 'Heart Of Glass' in a reggae style (check out this earlier version of the song which includes hints of funk and reggae) but their producer Mike Chapman reportedly told them reggae didn't sell in America! Nevertheless, the bands interest in reggae and ska continued. According to an interview Harry did about the inspiration for recording 'The Tide Is High':


“It was through Chris that we came to do ‘Tide is High', notes Harry, “because he had been over to England in the early seventies and he’d come back with all these records. I think they were like Virgin compilations of reggae songs, and so I think that was when I heard ‘Tide is High’ and we decided to use that. But you know reggae was also getting some airplay on some of the radio stations in New York at that time so it wasn’t a totally inaccessible sound to us. But those records that Chris brought back really got us thinking about doing it for ourselves.”

Before embarking on recording the song on their own, rumor has it that Stein and Harry approached another band to record the track with them.  Stein revealed in a 2008 Mojo Magazine article that he and Harry, who were both fans of The Specials and 2-Tone ska, approached The Specials (who were their label mates at Chrysalis Records) to serve as the backing band for the track with Harry on vocals. The Specials apparently turned them down.  But imagine if they had taken them up on the offer? The Specials might have had a #1 hit in both the U.S. and the U.K!

The band recorded the song in Los Angeles and spent a considerable amount of time getting it just right. According to an article from Mix Magazine about the recording of 'The Tide Is High':


Part of the pre-production for 'The Tide Is High' included listening to a cassette of the original version, for reference and for inspiration. The Paragons' song, written by John Holt, is a straight reggae tune, with its syncopated, persistent groove and soulful harmonies. To make it their own, Blondie added a horn section, strings and more percussion, not to mention Harry's lively singing.

The horns were played by six members of  the Johnny Carson 'Tonight Show' band. Stein also stated that the song includes "eight tracks of drum sticks tapping on a piano bench."

The song was included on the 'Autoamerican' album and went Platinum, rising to Number 7 in the United States and Number 3 on the UK charts in early 1981. The song 'The Tide Is High' became one of two Number One hits off the album; the other was the 11-minute 'Rapture.' Below is the Blondie video. You gotta love the random 'Darth Vader' cameo which made the video one of the strangest ever made.

That sounds like a Gregory Isaacs version of the song under U-Roy, can you confirm whether the Cool Ruler covered it?

Hi Nehama! Yes you are correct. That is the Cool Ruler version. He did cover the song as well. Good ears!

U-Roy did do a version of the original Paragons tune in '69 as well. There's also a beautiful dub version of the tune on the Pleasure Dub album called "Dub with Strings"

God...on the live video, you can really hear how amazing Debbie Harry's voice is..."The Hunter" was a pretty bizarre album, though; not their best.

I had a cassette of it that I remember listening to on my Walkman one summer's day when cutting my parent's hedges. I wanted to like "The Hunter," but it just wasn't that good.

Re: "The Tide is High" video--remember when Soho and the East Village actually looked like that?